Phew, that's a lot of traffic 😅 What happens when a blog post goes viral? 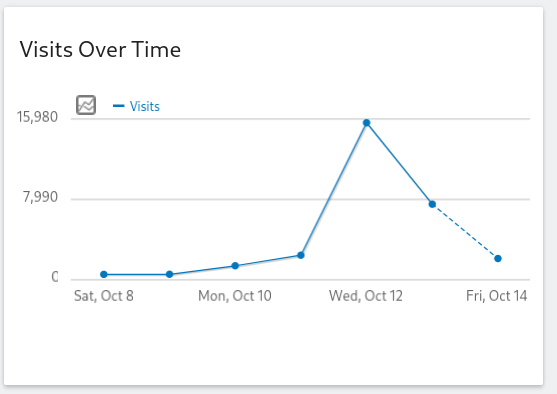 In the last few years, I've had a few posts on my site that have been particularly popular, and are arguably "viral". This has meant I've been on the front page of Hacker News, /r/programming on reddit, and The Changelog, as well as being featured in several popular newsletters.

If you know me and my blog, you'd have expected that I enjoy this attention, and for the most part have enjoyed reading through and replying to some of the discussions around the Web. I've fortunately not had too much hate thrown at me, which I'm very thankful for.

This week, my post Lessons learned since posting my salary history publicly was picked up by The Changelog, and subsequently cross-posted to Hacker News, and as traffic started dying down yesterday, I started seeing traffic from TL;DR newsletter (as well as few messages from friends to let me know if I'd seen it), driving a fair bit more traffic to the site.

It's meant that I've had a few more data points to reflect on what happens when my site goes "viral", and because a number of folks have been interested about what it's like, I thought it'd be good to blog about.

As mentioned in [Lessons learned since posting my salary history publicly], I enjoy keeping an eye on my site's analytics:

I love the dopamine rush of watching my analytics climb up after posting a new post, or trying to work out where referrers are coming from when I see a sudden spike in hits, and I will always have my analytics open in a window on my desktop, so I can see what's going on at the moment.

My first caveat [...] is that privacy-protecting browsers and extensions often block it (which is absolutely fine, by the way!) so [...] numbers are definitely not as many as it's actually gotten, it's just based on how many people don't block my analytics.

As you can expect, there's a lot of traffic that comes from starting to being featured on these sites, but with this privacy-protection, it means that the numbers I reason about with my site can't be trusted, while also giving me the chance to inflate the numbers when talking to people, because I can say "I've measured at least 35k hits this month", and leave it up to the imagination to how many hits may have been blocked by tracking protection.

For some hard stats about what these posts have recently done for me, this is a view of the last 5 months, highlighting 3 posts that have been popular in that time:

This is a fair bit of traffic (at least for me), and it's a really good sign to me that some of my posts are pretty great (citation needed). I will also say that my base level of traffic is also pretty awesome, and is almost entirely through search engines, and people finding my content useful.

As I use a Content Delivery Network (CDN) with a static site I'm fortunate that it doesn't lead to an incredibly high bill, or risk of needing to scale, but there are always things I can do to improve.

What's interesting is that although the post may have landed on Hacker News or /r/programming, we don't see all the traffic from there, but also through aggregators such as hckrnews.com, flipboard.com, hackerweb.app, among many others, as well as folks' feed readers.

It's also been cool to see that in the days/weeks since my posts, some of them have been picked up in newsletters, podcasts and other news aggregation, which gives me a good source of new places to look, especially as they're probably aligned to my interests if they're sharing my posts 😄 I mostly piece this together through the use of referrers to my website, which is also stripped in a lot of places for privacy - also good!

There's also a lot of traffic that comes over time from people looking back at old popular posts, rather than the traffic completely disappearing after the post is no longer on the front page.

As well as using Bridgy for being able to publish my posts from my site to silos such as Twitter, I use it for something called backfeed, which lets me know when folks mention my posts on silos.

This means that in the last couple of days, I've been receiving tonnes of webmentions to show that folks have been sharing my article, which is also nice to see.

It's also been cool to see so many new followers on Twitter since the post, and people either viewing my LinkedIn profile or following/connecting with me. Because I have no way of gauging how many readers I have on my site, it's a vague indicator that folks are interested in hearing more of my thoughts.

Getting to the front page of Hacker News

Something I've noticed is you really need to just get to ~5 points upvoted on Hacker News before it reaches the front page, and starts gaining momentum. When I've noticed that my posts have been shared there, I'll upvote it to nudge it along, and hope that the Web does the rest of the work.

I hope this has been an insightful read, and it's given you an insight into what sort of traffic and effect that having a blog post be popular leads to.

Looking at some of the things that happen when my posts have gone viral, from how much traffic it brings, to the various sources of traffic.