How to Undo a git push --force

I really like telling a descriptive story with our Git commit history, and spend a fair bit of time making sure that the history provides the right level of information.

Because writing Git commit messages, and having a good commit history, leads to needing to rewrite Git history, I'm quite comfortable with git rebase and rewriting Git history safely.

One of my colleagues recently got in touch with me to say that they'd force pushed to the wrong branch, and needed a hand to recover things if possible.

Fortunately, this is something I've had to do numerous times - because I've got it wrong myself - so I was able to help.

In the spirit of blogumentation, I thought I'd document it for future me.

Finding the commit hash to restore

Note that these are from the viewpoint of your local machine being the one who's pushed it - if trying to recover someone else's, you may need to git fetch --all at some point, and play around with the commands. Unfortunately, without a practical example, I can't share too much about how to do that.

From the Git CLI

With the output from git push --force

The first thing is to make sure that they didn't close the window, or lose the output of the command they'd just run to force push.

Let's say that the output they see is:

Git is telling us that it's just force pushed the branch update/wiremock-docs to commit 5e2791da4, when before it was c574fceb1.

This means that the left-hand side commit hash, c574fceb1 is the one we need to restore to.

Without the output from git push --force

If you don't have that output any more, we can fortunately use git reflog to recover this.

If we're using the branch update/wiremock-docs, on the Git remote origin, then we can use git reflog like so:

When force pushing on GitHub, the UI shows information about the force-pushes that have occurred: 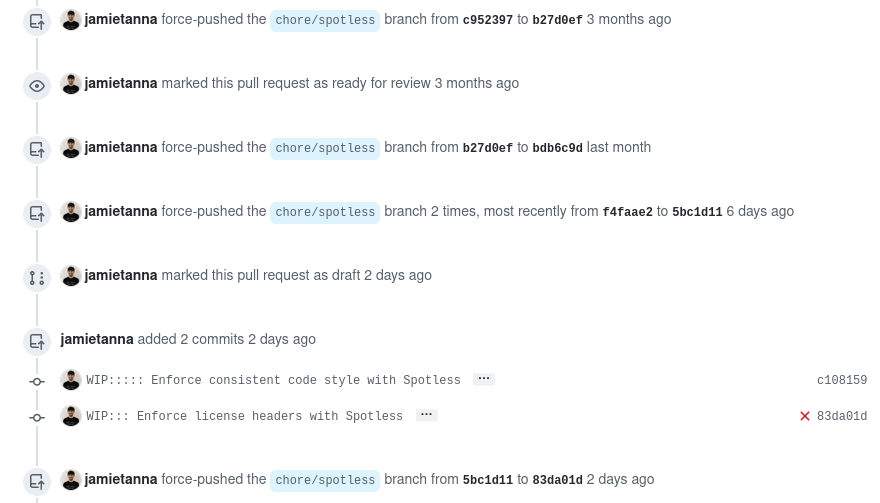 GitLab's UI isn't as clear to read as GitHub's, and so I'd recommend using the git reflog trick from above if possible.

However, if you want to try it, GitLab lists the set of commits that are new to the branch:

Now we've got the commit hash we need to restore to, I'd recommend backing up where we currently are, with the commits we've just force pushed over with:

Then, we need to reset the current branch back to what it was before we force pushed, for instance:

This then gets us back to where we were, and we can continue with backup/overriden-branch's progress and push it to the right branch this time!

This post's permalink is https://www.jvt.me/posts/2021/10/23/git-commit-verbose/ and has the following summary:

How to recover from a force push with Git.

This post's featured URL for sharing metadata is https://www.jvt.me/img/vendor/git.png.