Anna and I have just had a bit of a reshuffle of our home office, and I thought I'd share the new setup.

This is also a little bit of a brag post, as I've just got a new monitor, and wanted to show it off, but also to talk through the new setup as we settle in for the long-haul of self-isolation, and what we think will work for us.

The main reason we decided to reshuffle the office was to support our day jobs, which we'll be doing from home for the foreseeable future.

With the start of Anna's new job at the DVSA, she's found that so far there are more meetings over video conferencing - some of which is to replace the in-person onboarding that they'd usually do. Within my job, I spend a fair bit of time either in meetings, or supporting colleagues remotely with code pairing.

So having both of us on calls, sitting right next to each other and talking, while working on mechanical keyboards, isn't ideal in the slightest. And makes us both more aware of what we're saying and doing, and can mean that it's a bit harder to speak about our confidential work, when the other's microphone may be broadcasting it to their colleagues.

We made a to-scale measurement of the office so we could more accurately move things around, which was a great idea of Anna's. It was quite fun moving things around, visualising it in a better way than just trying to do it in our minds, or worse, guessing whether things would fit and moving them around anyway.

This is what the office's layout used to be: 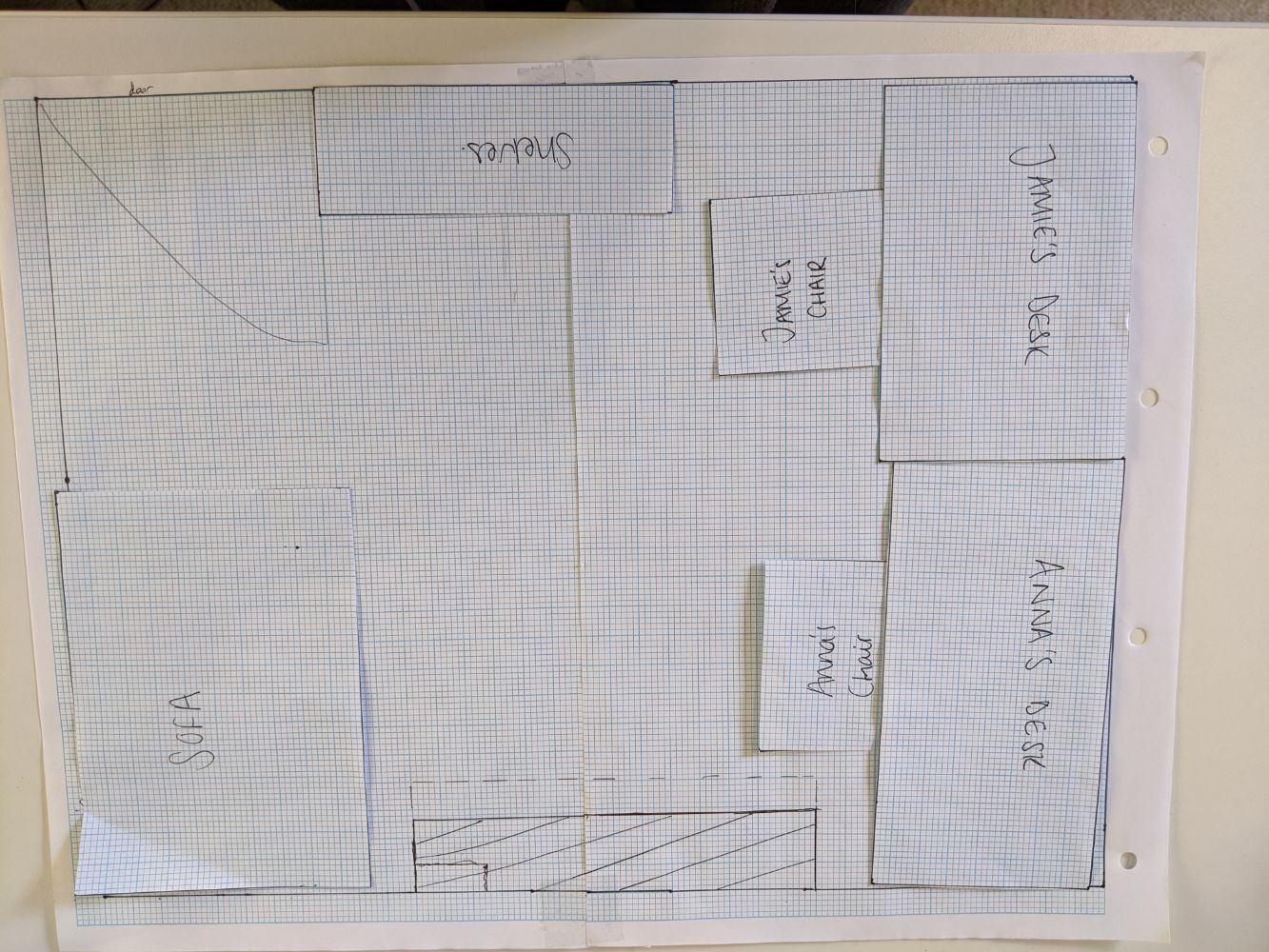 This layout worked great when we were working together in our spare time, where we'd be happier to be distracted by each other, but it wasn't built for full-time remote work.

To this new setup: 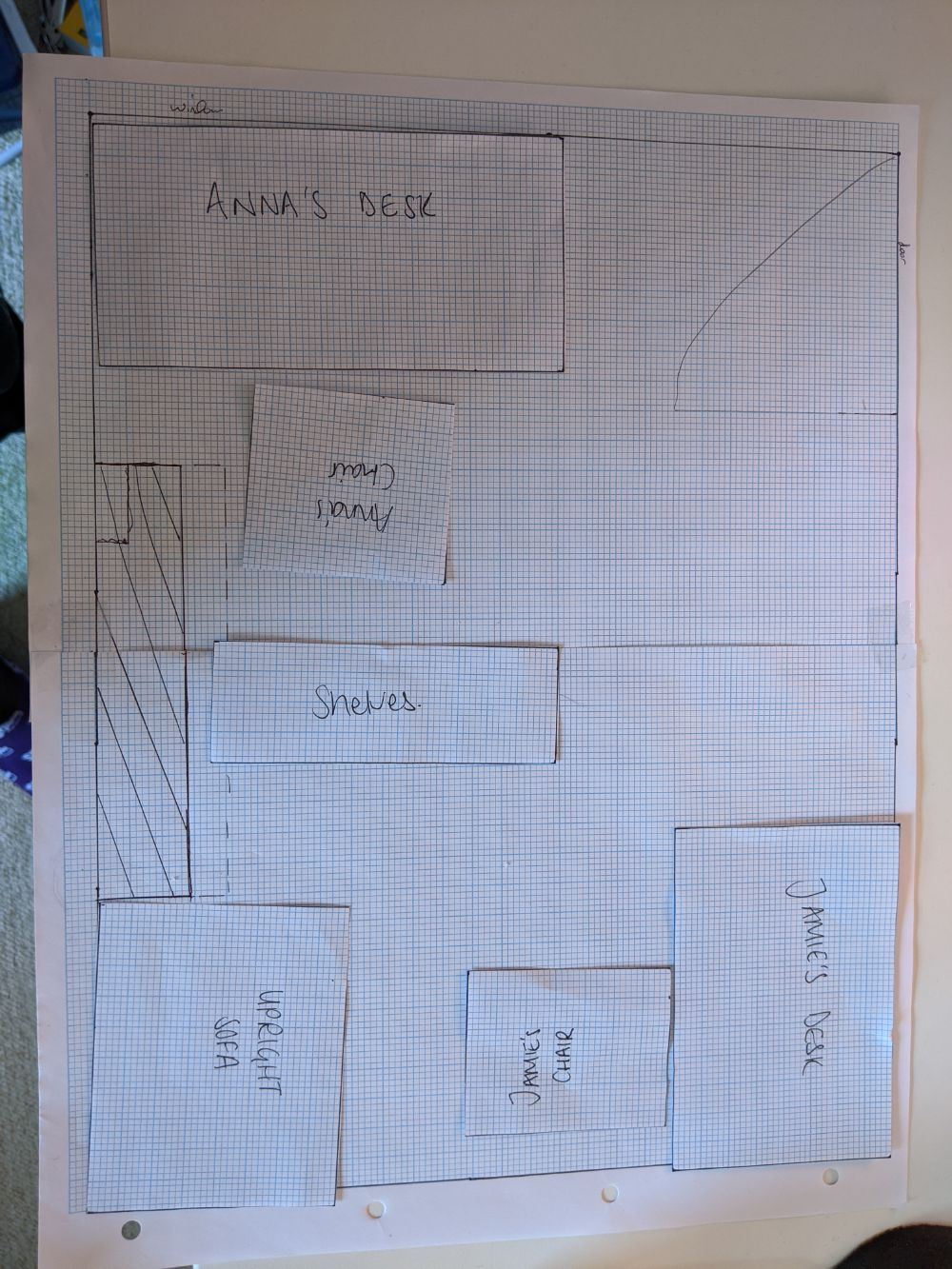 We've also got a BEKANT screen coming in a couple of weeks to add a little bit of extra sound insulation and privacy.

And finally, we've got a hot-desk on the dining room table, which we're using for times that we would want to have the microphone on all the time, or have sessions where we're probably going to be chatting/having a bit more fun and don't want to distract the other. The change of scenery is great for a coffee call, and to give us a break from the same four walls, as well as being able to see Morph.

The other alternative for the move would be to move one of us out of the office long-term, which would mean either reshuffling the bedroom to allow for space to have a desk, or to move into the dining room. As it'd remove our chance to use our desktops, and also mean we wouldn't see each other that much, we decided against it.

I've been playing with the idea of going for a standing desk, as in my "real life" office, I had a standing desk there, and I used it a lot. I really enjoyed having the option of changing how I worked, and it was something we thought about over the summer when we got these new desks for our home office. But I decided against it as it's meant to only be for free time, all day, every day - if I'd have had perfect foresight I would've predicted Coronavirus, and thought about getting one, but oh well. I may have to reconsider the idea, and get one to make it possible for me to mix up my working habits, as I don't want to get to the point where I'm sedentary again.

You'll notice in the photos below that I've got some NanoLeaf panels next to me. These used to be behind our monitors, but now things have changed, they're more visible. They're also my primary source of light - with the shelves and the BEKANT in the future, my natural light is largely blocked. I'm alright with that, given a few years ago my flat had the bedrooms literally underground, but I wonder what it'll be like long term. 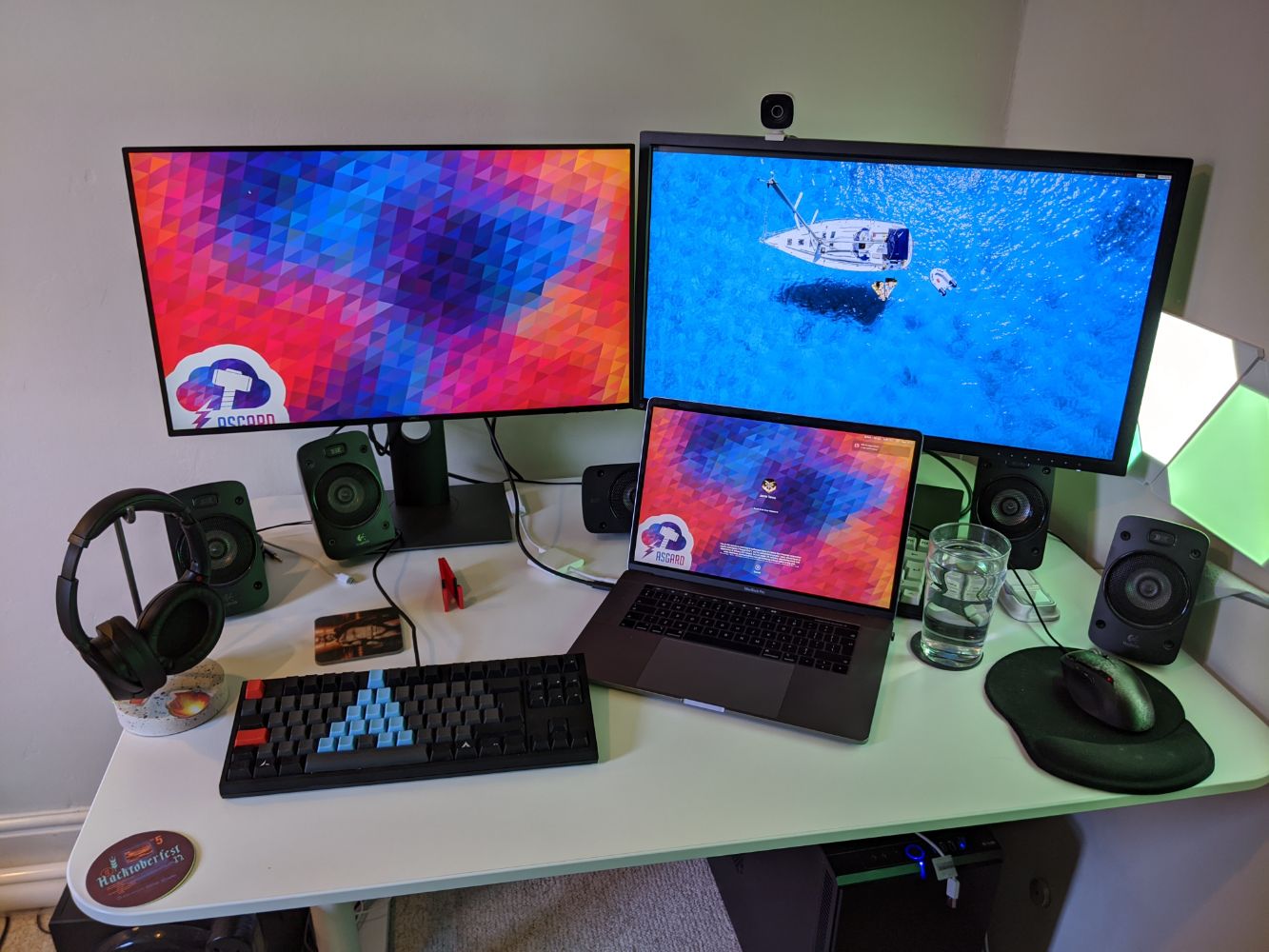 The work Macbook I've got is USB-C only, and I've never had good luck with getting the right adapter to work with Macs - I've always found that you either need an overpriced official adapter / display cable, or you're not gonna be able to connect your device.

Although I was able to get it working with my QNIX QX2710 27″ Evolution II, I wasn't finding it amazing, and would much rather be using a 4K screen so I had more screen to work with.

I'd also not yet gotten around to connecting my mechanical keyboard up to my laptop, which meant for the last ~43 days I've just been working on the inbuilt keyboard, which is not nearly as good in comparison. I guess part of that was me not feeling like I was happy with the setup, but also because it was a bit awkward as I'd need a USB bridge/additional dongle to get all the cables connected. So having a monitor that could have that connectivity available (and be its own USB hub) would be best.

In the days before Coronavirus, when working from home, I would use Anna's ultrawide monitor which had USB-C, not just because it's a great screen, but because it had the benefits of charging the mac too, which meant one fewer thing to worry about. With all these other pain points, and realising that we'd be here for a while, I started to think about looking for a new monitor.

I'd looked around for some of the best USB-C 4K monitors, and kept falling back to Dell UltraSharps, because I've always wanted one. Although a bit more expensive, the idea was that they're used by designers, so colours are going to be pretty important to them, and I'm a big fan of Dell's designs - such as the XP13 which I very much love.

I ended up getting the Dell UltraSharp 27 4K USB-C Monitor: U2720Q because it had everything I wanted, and I thought I may as well spend a little extra money on it given I'll be using it lots over the coming months.

And I know that likely very soon I'll be looking to upgrade my laptop, and having the option for USB-C will be imperative here. 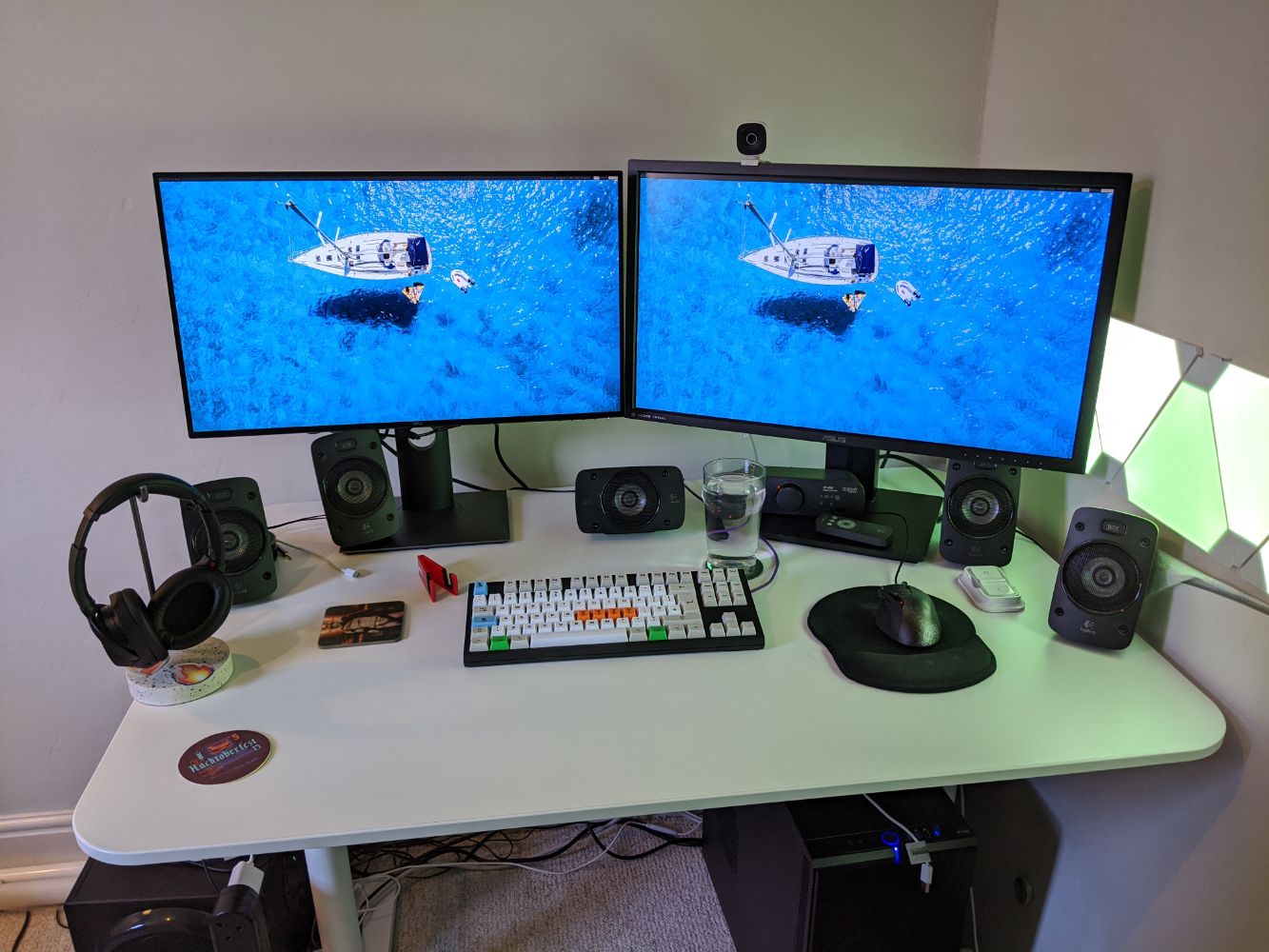 And finally, in the hours where I'm not working, I want a nice setup to be able to work on projects, blog or attend meetups.

Having dual 4K monitors has been very nice so far, and I'm looking forward to taking advantage of the new screen real estate.

The Dell UltraSharp is, as the name suggests, ultra sharp. It's such a noticeable difference between this and my Asus PB287Q, and I noticed it especially when I was playing Apex Legends last night as the colour were much more vibrant.

This post's permalink is https://www.jvt.me/posts/2020/04/26/new-office-setup/ and has the following summary:

Sharing the new layout for our office, and my new desk setup with my new Dell UltraSharp.

This post's featured URL for sharing metadata is https://media.jvt.me/23813aa883.jpeg.